Who did you idolize as a teenager? Did you go crazy for the Beatles? Ga-ga over Duran Duran? In love with Justin Bieber? Did you think Elvis was the livin’ end?

I had a few crushes when I was a teenager, but my crushes were never directed to the teeny boppers, I liked the more mature twenty something group. I remember having two big crushes, I can’t remember who came first; Pierce Brosnan when I first saw him in the mini-series Manions of America and then in Remington Steele or Jon-Erik Hexum in the drama series Cover Up. Both men were dreamy in my teenage opinion. I even had a poster of Jon-Erik Hexum and I was so sad when I found out that he accidentally took his own life goofing around with a pistol filled with blanks on the set of Cover Up during downtime in between takes. He was only 26 years old and it was the most stupid accident that I had ever heard of at that point. He was replaced or should I say that his character was embodied by another actor, but for me the series was never the same and I quickly lost interest.

It was then that I dedicated my attentions towards Pierce Brosnan, the Irish, devilishly handsome, quick with a quip, actor who charmed everyone with his character as Remington Steele which ran for several years before he was tapped to be James Bond. I fondly remember him in the mini-series of Manions of America where I fell in infatuation with his Irish brogue, black hair and piercing blue eyes. 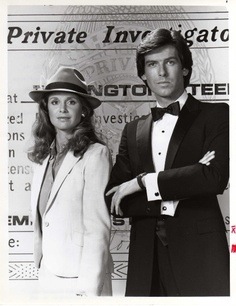 These were my two crushes; I didn’t really go for the rock star crush, I think that my two were enough to fill any young girl’s fantasy world. I was more than happy with my adolescent day dreams. Silly young girls and their teenage crushes.