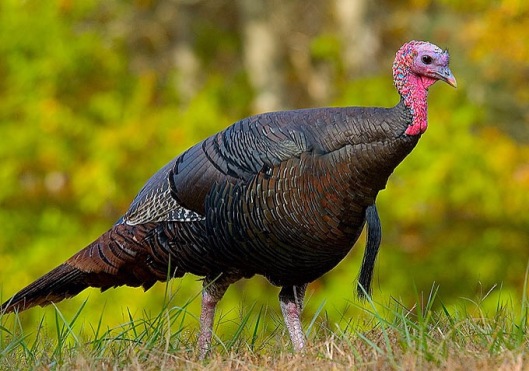 Driving down to New Jersey this morning, I had just passed the New Boston Inn right on Route 8 South and lo and behold, a very large wild turky decided to cross the road, for a few seconds I felt as if I were playing a game of chicken with the wild turkey as to who had the right of way, but in the end the wild turkey won and I slowed down  really quickly to allow her to cross the road safely. She was alone, she must have been an older bird because she was very large in size. I am more used to seeing two or three smaller females leading their flocks of baby turkeys across small town roads being so cute in single file. To this day I have yet to see a Tom turkey, though  I am always on the look out. Funny enough when my husband said “that was a close one” I replied “yes we could have had a turkey dinner tonight”. He didn’t find that funny, I guess that joke only works on our kids, they appreciate the French dark humor of being at the top of the food chain.

I think that it was about ten years at that very spot that I had seen my first black bear. I got so excited that I slowed down to a crawl and called out to the kds to look on their left, our daughter had the chance to get a look, but our son had missed the bear, he had turned towards the woods and retreated away from the road before our son could get a good look. Another time, I got excited over a blue crane running alongside the car and taking off in flight, the kids saw that one.  There once had been a gorgeous fox crossing the road, but the kids missed him, his tail was a thing of beauty, I remember it well.

I do love living somewhere where you never know what kind of wildlife you might run into, iit is very humbling in my eyes, it reminds me that this place is not just for me, it has to be shared fairly and sustainably with all living things.

Today, Wednesday, the Northeast got hit with another snowstorm. Us, being in Virginia this morning or really until 3:00 this afternoon, saw none of the snow, only freezing rain this morning. By the time we headed out of Virginia, the roads were dry and safe and we were making excellent time driving up north.

Granted we were driving towards the snow but as the miles came and went through Virginia, Maryland, Delaware and finally New Jersey, we still hadn’t seen a bit of snow. I wasn’t unhappy with that, au contraire, it made driving very easy.

We didn’t see serious snow until we got on the Henry Hudson and even then the roads were clear. New York State did an excellent job of keeping their roads safely clear and maintained. Heading into Connecticut, we were extremely lucky that all along route 84 there wasn’t any snow falling and that it had been plowed earlier, so it was still safe. We also lucked out on route 8, it still wasn’t snowing and it was only towards the very end, after we had passed two police cars with their lights on stopped, blocking a crashed car off the side of route 8, that the roads had started to get slick due to falling snow.

Connecticut is the second wealthiest state per capita, but its actual state budget is close to the red each and every winter because due to their low tax rate, they never have enough in the coffers to keep their roads plowed in the winter. As I was driving, I couldn’t wait to hit the Massachusetts line because I knew that we would be home free, even if the snow started coming down harder. And I was correct, the line of demarcation between Massachusetts and Connecticut is astounding to see, it is literally a difference of two inches in depth of snow versus clean and salted black top. I love driving in Massachusetts in the winter because our state highway personnel really take care of our roads, we may have higher taxes, but I prefer to drive safely over ending up in a horrendous accident. It is really a matter of priorities; invest together in the common good for everyone or have more money individually and have dangerous roads. I prefer safety.