The thing that I love most about myself is how easily I find humor and humorous situations. I adore laughing and I laugh at least once every day. I don’t have a gentle laugh, it isn’t elegant by a long shot. It is raw, loud and spontaneous, it comes from deep in the gut, exploding outwards, assailing some with its hyena-like sound. My family loves my laugh and my baby girl especially likes to brag it about it to her friends, she likes to think that my laugh is very contagious.

My hubby is connected to my love of laughter and humor, he is the main reason as to why and how I laugh every single day. He is so very funny and he knows me better than I know myself so I am constantly surprised and I erupt in spontaneous laughter. He records shows that he knows will get me gasping for air from non stop laughing.

They say laughter is the best medicine and so I have a brilliant physician for a husband because he keeps me well dosed in laughter and I am so very lucky and thankful for it.

I am not planting my new plants today, as soon as we got them home, I watered them and that’s it until Monday. I was serious when I said that I wasn’t going to do anything physical until Monday. I need to rest, I let myself get way too fatigued this week. Just getting the plantings put a smile on my face, the thought of putting them in my planters in the front of the house is exciting, the planters will be so pretty with the colors yellow and green peeping out from the top.

Gardening is a wonderful pastime and a relaxing hobby, it does me a world of good.

Of course as usual, part of my responsibility is to provide beverages and homemade goodies, so as soon as I got home from cleaning and setting up, I got to baking. I made small French cakes called financiers. These little cakes are really very tasty and quite easy to make, I bookmarked the recipe. I had to translate the recipe and the measurements from French to English which wasn’t too hard. The recipe itself is interesting; it’s mostly egg whites, chopped walnuts, melted butter, confectioner’s sugar and a little bit of flour. My hubby and the baby girl loved them and got a little peeved when I announced that these little cakes were for the Historical Society. I told them that I was going to make a banana walnut bread for them and I did. Hopefully that will keep them happy. 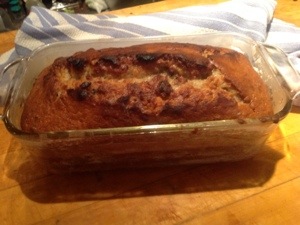 The baby girl, the hubby and I met up at the cinema to go see Iron Man 3 in 2D. I made the decision to see it in 2D because 3D gives me frightful headaches and I don’t find it to add that much more to the entertainment factor. I believe that I made the correct call since neither the hubby nor the baby girl complained once. Iron Man 3 was action packed, dramatic, full of twists and turns in the plot and a fitting denouement for the hero.

We get to see the true measure of Tony Stark without his Iron Man cocoon, his words, his suit had become his cocoon, I think that it made for a richer story. After three movies, the character of Tony Stark needed to get through his arc of growth and pain. We are seeing his evolution during this stage and it does the overall storyline a lot of good. Every hero has to be flawed and go through trials and tribulations to make us identify and root for them.

Tony Stark and his vulnerability reminded me of Robert Downey Jr’s own strife and challenges not too long ago and to see him embrace his second chance at life is a wonderful thing. When you descend so low, he went very low with the alcohol and the drugs, the road uphill, though it is so hard and incredibly painful, once you get there to the land of redemption and sobriety the air is so much the sweeter. Addiction is a dark and lonely universe and I am so glad for Robert Downey Jr and his success. I don’t know if I am reading too much into his character study of Tony Stark but it makes me feel very sympathetic to him.

We enjoyed the movie immensely and the preview for Thor 2 was exciting to see. Part of the delight of seeing a movie is the excitement generated by well directed previews, just enough to whet your appetite for more movie, always wonderful to be teased by a snippet of entertainment.

You’ve been asked to do a five minute presentation to a group of young schoolchildren on the topic of your choice. Describe your presentation.

I have had experience doing this and I can happily say that I had fun doing it. When I taught French to the little ones for seven years, I occasionally went up to the upper grades to do a guest teaching stint and as you may well guess older kids, the pre-teens, need more from a teacher. They need to be persuaded that what you have to say has value either by establishing an instant authority or convincing them that they will really enjoy listening. I was able to establish instant rapports with all the grades when I would visit the upper classes because they knew that I was the French lady, so there was curiosity and many of the older children had younger siblings who talked about their daily encounter with Madam and what we did in class together, so the ice was already broken for many in the class.

I would teach them about Greek mythology, history, math or basic French vocabulary and whichever subject we were dealing with, I made a point of telling it through a story like lesson. My intent with the story was to personalize the lesson to their experience to make them see how applicable the lesson could be in their own life.

I remember that Greek mythology was a definite favorite amongst the upper grades, I was talking about cooking, French cuisine, spices and I mentioned the laurel leaf which I believe is another word for bay leaf. I told the story of how the laurel leaf was part of a story in Greek mythology. The God of music, beauty and light was Apollo, he was wandering along in a meadow and spied a beauty young nymph who was gathering flowers. Apollo started towards her and she was very shy so she ran, Apollo forgetting his manners, started running after her calling out for her to stop, but he had never introduced himself properly, so she didn’t know what his intentions were and being frightened she kept going. Nymphs just happen to children of River Gods, fiercely loyal and over protective of their beautiful daughters plus equipped with a sizable pair of sharp horns, our poor frightened nymph called out for her father’s help and since he was too far away to physically defend her, he could only use his powers to transform her into a laurel tree, safe from the hands and lips of the god Apollo. Apollo when he at last caught her, he found himself hugging the tree, no longer a nymph, Apollo kissed the bark of the tree and made a wreath with the leaves proclaiming the laurel leaf to be special and all future heroes would be awarded the laurel wreath upon victory. The kids always appreciated stories like that, they learned why past Greek athletes and Roman emperors and statesmen wore laurel wreaths; the god Apollo had blessed them with their significance.

I did really enjoy teaching those kids for those special classes, since I didn’t have them all day long, I had a fresh take on the whole dynamic. Make no mistake I was friendly with all of the teachers and I saw first hand how challenging and exhausting being a full-time teacher is, those kids will run you ragged, all the while surprising you at the craziest times. However, each teacher to the one, will say that teaching is their only choice as profession. It truly is a calling.

Today was bitterly cold for poor Jack and I. I promise you that our walks were unenjoyable to say the very least; the high today was a mere 21 degrees Fahrenheit with a wind chill factor of I don’t know how much lower. The only thing that can get the chill out of your bones is hot and hearty soup and if not soup, than perhaps some slow cooked pork roast.

So that is what prompted me to take pictures of this weekend’s ingredients. These vegetables will be transformed into various hot and delicious dishes. The butternut squash will become roasted butternut squash soup with sage and roasted garlic, the broccoli will be blanched and then sautéed with garlic,that is the plan for the vegetables. The accompanying members of the meal, the meat and fish will be transformed as follows; the pork shoulder will become slow roasted pulled pork and the flounder filets will be sautéed and sprinkled with lemon. All this will transpire during the course of this weekend. Just the smells emanating from the oven and the kitchen, I think will be enough to warm our cold bones. I hope that what the smell and anticipation does for me, it does the same for Jack. He isn’t allowed table food but he is allowed to smell what is cooking and I hope that in some small way the smells makes him feel all warm and happy. 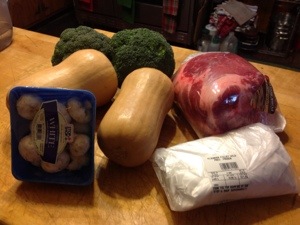 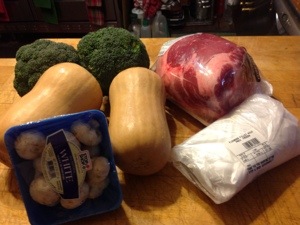 Today is the first day of 2013 and it has been a restful one; a beautiful day of rest and relaxation. I had my lovely breakfast of two pieces of rye toast with fig preserves and 3 cups of coffee. I read all of my e-mails, I wrote my daily comment on the state of affairs going on during this fiscal cliff crisis; drives me nuts, and I answered the Plinky prompt. Like I said; a lovely late morning.

My hubby and I are spending time together as always though my hubby and the baby girl watched episode after episode of Doctor Who while I caught up with my episodes of General Hospital. Jack and I did our mile long walk twice already and he was fed his vittels, so he’s a happy camper.

I took a small amount of time to make stuffed mushrooms the way my mother-in-law or Nonnie as we called her, made them. They are the easiest to make; saute two onions and four cloves of garlic, both finely minced, in a mixture of olive oil and butter, add the mushroom stems finely chopped to the onion and garlic along with some dried oregano and thyme and saute until soft. I then add Italian seasoned breadcrumbs with some more butter to the onion, garlic, mushroom mixture until the mixture binds together and then I lightly season with salt and pepper. I stuff the mushroom caps and put them into a 350 oven for about twenty minutes and voila stuffed mushrooms.

Now I am sitting down writing about this beautiful day and the start of a new year. I am not even thinking beyond the next hour; that is how restful this day is.:) 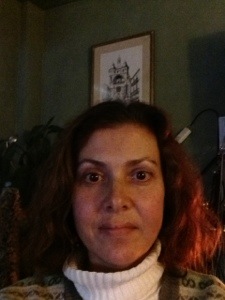