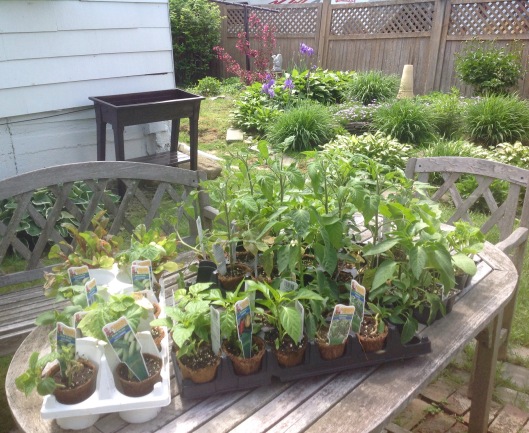 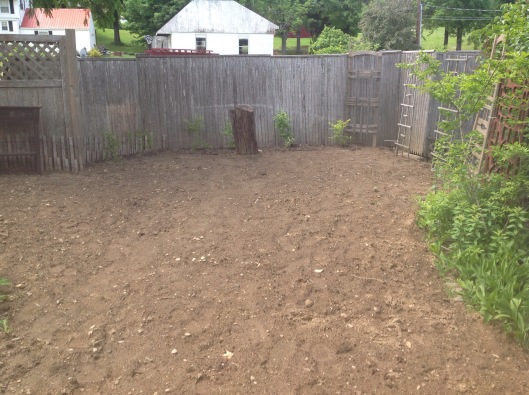 I haven’t planted a vegetable garden in ages; I think the last time that I planted tomatoes had to be over five years ago. The reason I am doing it this year is because we had two trees taken down, they had been doing very poorly and so now I have a brand new direct sun filled area, perfect for planting a vegetable garden.

I remember twenty years ago, when we had just moved in to the house, the concrete pad right behind my gorgeous rose bush hadn’t been poured yet, it was an empty plot of dirt, perfect for a vegetable patch. I had borrowed my mother-in-law’s tiller and tilled the soil, I had planted rows of peppers, eggplant, tomatoes and herbs. I had a fairly nice tomatoe harvest, but everything else was disappointing, if only because my patch didn’t have enough hours of direct sunlight. My one eggplant was maybe three inches long and my two peppers were adorable minature peppers.

This year I hope to have a lot more success with the new placement, so that is why I bought a bunch of tomatoes, red peppers, green peppers, yellow squash, one eggplant and several cucumbers. I hope that I didn’t get too excited or too ambitious. lol

I don’t know if you noticed, but at the end of the garden patch, I have an entire back row of blueberry bushes planted, this is a first and I am crossing my fingers that they take and produce at least a handful of blueberries this summer, if only to compliment the abundance of wild strawberries I have ripening throughout my backyard.
In other news, my new lavender is pushing up blossoms and my rose bush is ablaze in roses, it smells heavenly outside. 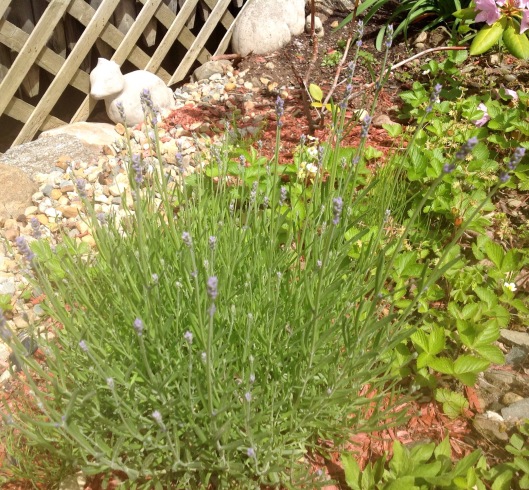