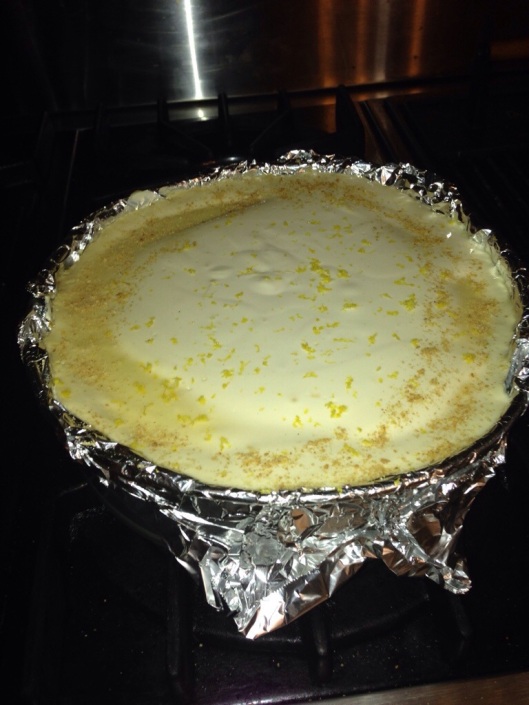 My sister hosted my mother’s birthday party yesterday at her house, she lives in Westchester, New York. The four of us drove to my sister’s house, a roundtrip ride and I brought the birthday cake; my mother’s favorite dessert of all time cheesecake!.

I remember, during my teenage years, making cheesecake very often for my mother; constantly experimenting with different recipes, eternally looking for the perfect cheesecake. It only took practically 3 decades and it actually was my husband who found the perfect recipe: here it is
http://www.myrecipes.com/recipe/new-york-style-sour-cream-topped-cheesecake-10000001677932/

What I have found over time is to heed the cooking times; when I inadvertently left it in longer, the cheesecake wasn’t as creamy as when I adhered to the time specified n the recipe.

We had such a lovely time celebrating my mother’s birthday. My sister had a great menu, Vietnamese themed, we had summer rolls and the Vietnamese sandwich Banh Mi. That was fun because my sister had set up a buffet and we all got to make our own rolls; my niece and nephew are huge fans of the summer roll. My poor nephew was feeling under the weather, but even sick, he is very entertaining. My niece was out and about roller-blading, but she came in when necessary, at food time. The Vietnamese sandwiches were easy to make and quite tasty; my sister and I assembled them together. She had two long baguettes warmed up in the oven and we split them in half, took out the insides to leave room for the filling, brushed the insides with a dressing of oil, fish sauce and soy sauce, then we spread a French pate, added a layer of rotisserie chicken, a slaw of daikon and carrots, sliced onion, and lettuce, my sister cut the baguettes into 4 inch sandwiches and we dug in, they were excellent sandwiches.

Actually, when my sister offered to wrap up some cheesecake for us to take home, I sheepishly admitted that when I made the one for our mother, I had made another one for us and it was waiting for us back home in our refrigerator. I did it for the kids and my husband, they are huge fans of the cheesecake.

I highly recommend trying the cheesecake recipe, it hasn’t let me down, not once.

I have made Madeleines a few times over the years, always following Gale Gand’s recipe and they turned out alright; no one ever returned one saying they didn’t like it. This time however, I went to the Joy of Baking and I am much happier with the results. Their recipe called for making the batter the day before and refrigerating the batter overnight; both recipes called for buttering and flouring the Madeleine molds, but this step is to make sure that your Madeleines don’t stick, not change the taste or texture.

The eggs, sugars, vanilla and lemon zest, I beat on med-high speed for at least 10 minutes until they were light, creamy and thick. I folded the flour mixture lightly into the beaten eggs and sugar and then I put the melted butter into a small bowl, folded a bit of the batter into it, whisked the two together and then folded that back into the batter. Once everything was gently folded together and homogenous, I covered the bowl with aluminum foil and pop into the fridge.

I found and both the baby boy and my hubby said it as well; these Madeleines seem lighter and spongier, maybe it was the resting in the chilled environment of the refrigerator that made the difference or the gentle folding at every step, either way I have found my new favorite recipe and technique for making Madeleines. 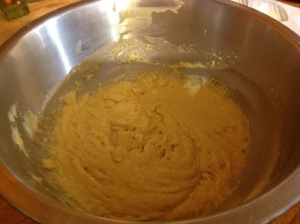 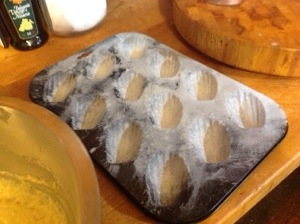 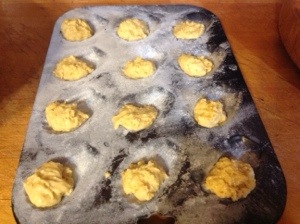 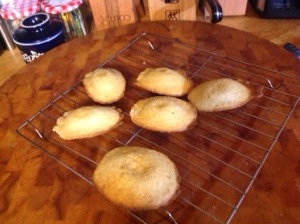 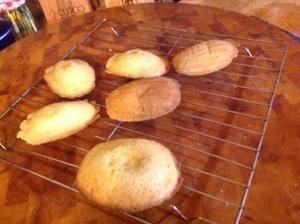 They aren’t the prettiest, but they are quite tasty. I would say that making a pot of coffee and enjoying one or two Madeleines on a cold day makes the work involved baking these little cakes or cookies definitely worth it.