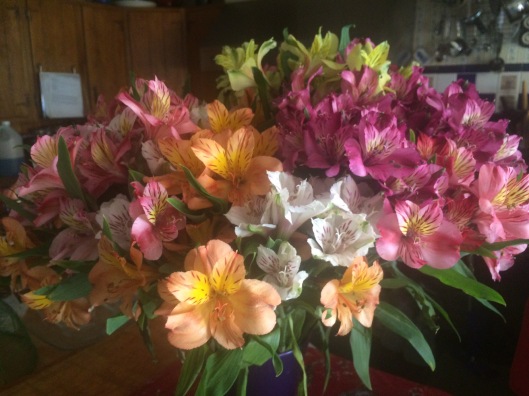 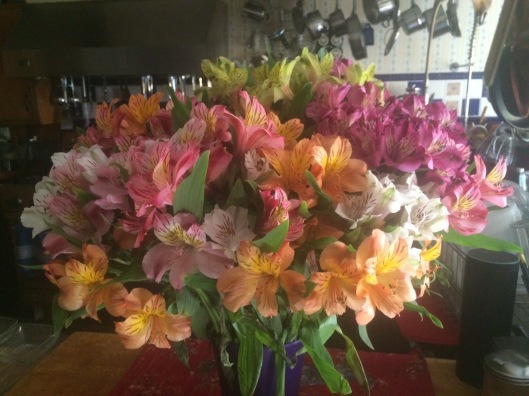 My bouquet is at its peak of beauty. Every bloom is at its fullest and the colors compliment each other wonderfully. Every time I pass by my flowers I think of my friend Annie and I smile. I am so fortunate to have friends like her in my life. I’m visiting with my mother and I showed her the picture of my flowers, she remembers our former neighbors and she was touched by Annie’s gift.

It’s hot in New York, thank goodness for air conditioning, the heat is making me weary. 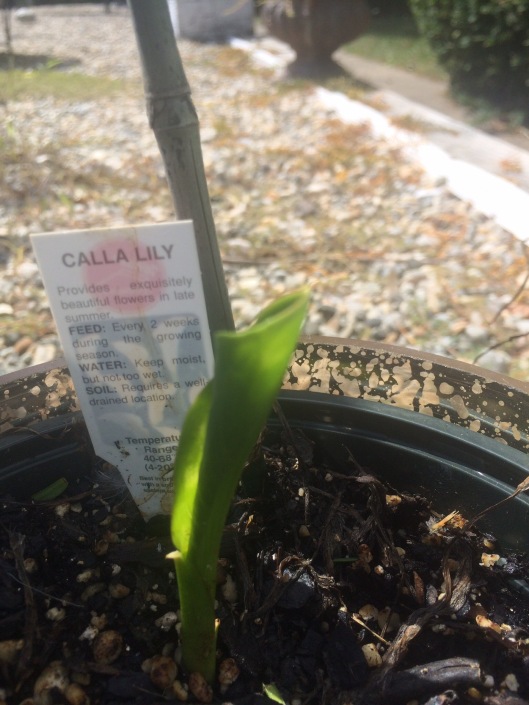 This year I kept the faded tulip and calla lily pots from the spring with the express purpose of planting the bulbs outside once it was warm enough. I had placed the pots right outside in the front, next to my hibiscus, thinking that I could hardly forget that they’re there. Well I completely forgot all about them, the chipmunks dove right into both tulip pots, I know because they left the skins behind after digging up the bulbs, and today while I took pictures of my hibiscus, I discovered what looked like the start of a calla lily, quelle surprise! 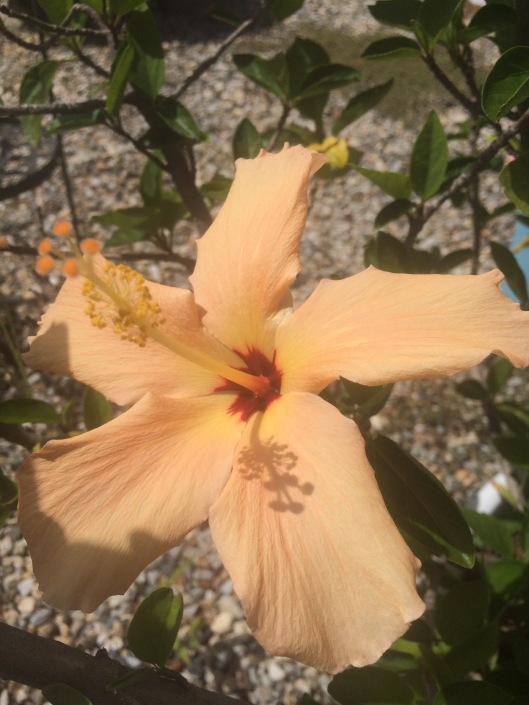 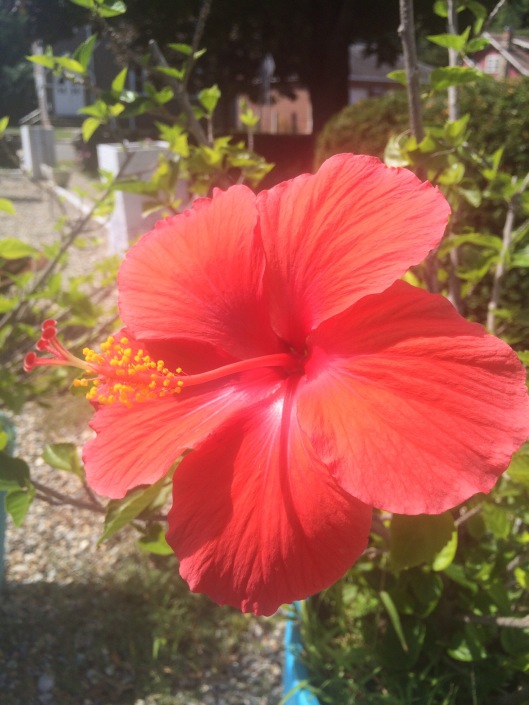 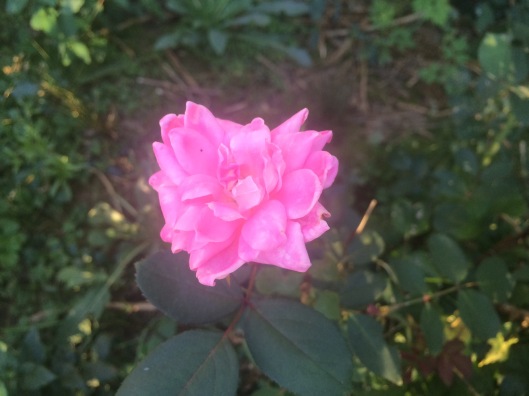 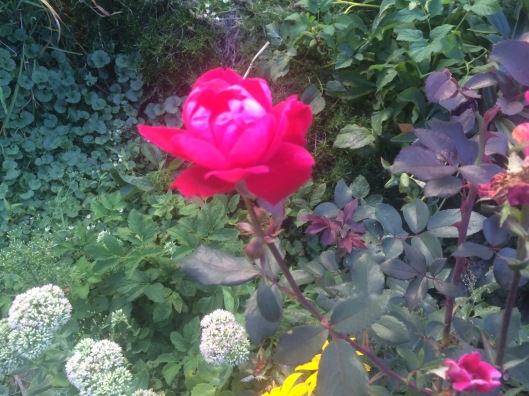 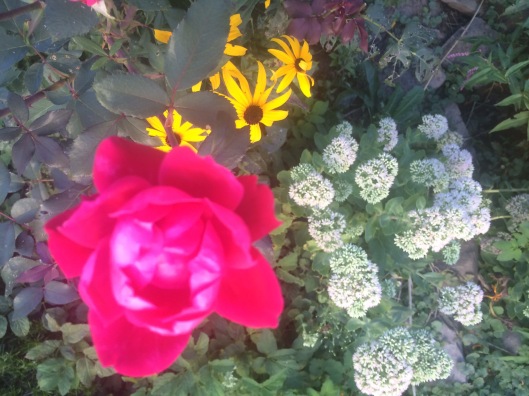 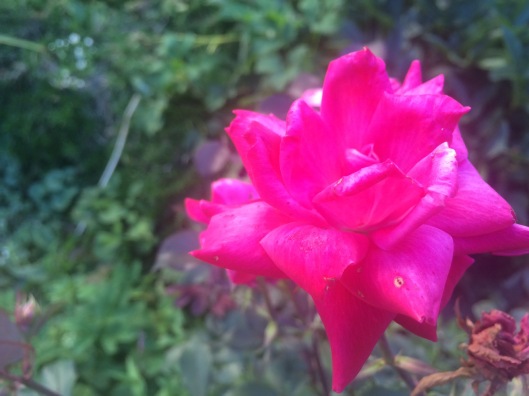 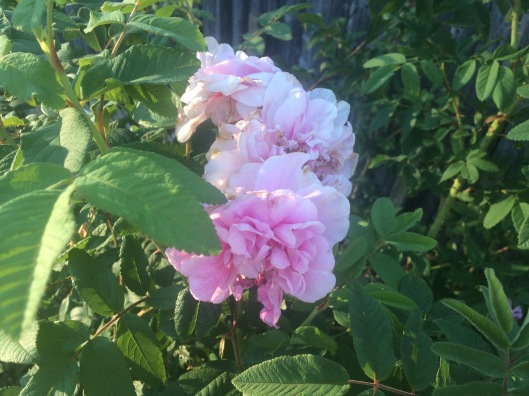 I still want a summer do over, if only for the roses. Mine are showing fatigue, they have given me their all this summer and now I think they are ready to take a rest, well deserved I have to say. I am impressed at how well they did in light of the drought conditions which has not let up at all. I love roses, mine are so fragrant, I love burying my nose in their soft petals, inhaling the candy like scent, the bees are huge fans. Outside of summer, I don’t think of roses, I’m not a big fan of cut roses, I find them lacking in fragrance, I’m more than happy to wait for my roses to wake up from their slumber. 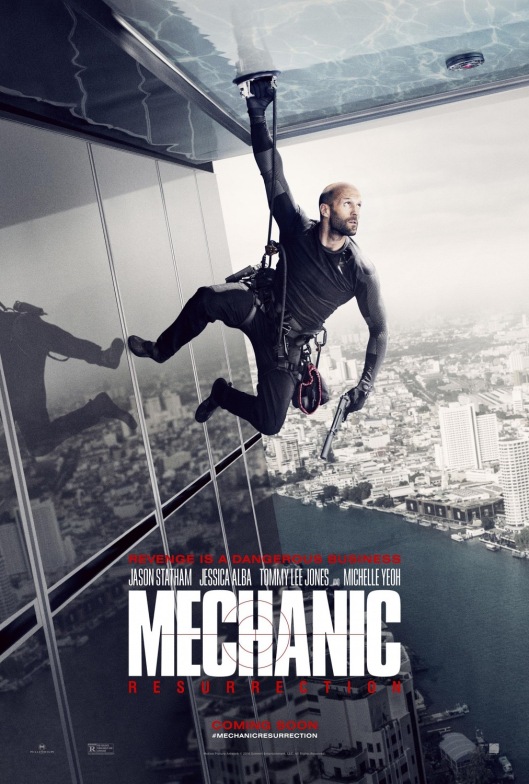 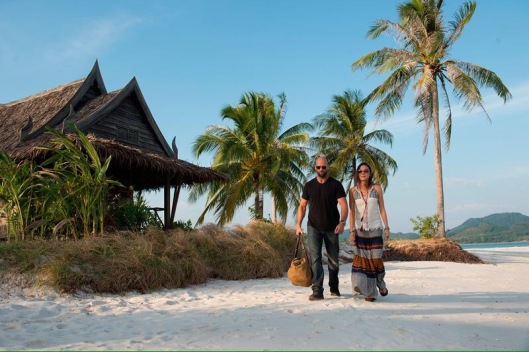 My husband and I have been fans of the Mechanic franchise, Jason Statham is one of our favorite action stars and so we were looking forward to this latest installment. Jason did not disappoint, not one bit, he still has it in him to be believable as a ruthless champion of the underdog. I have to admit I was disappointed that his character’s base of operations was no longer in the south of France, we also didn’t get to see his old friend the Inspector, they briefly explained why that was, it made sense, but I still missed the gorgeous French scenery. Speaking of scenery, Brazil, Thailand and Romania weren’t too shabby, my husband and I could see ourselves walking along the glorious beach where Jason had set up another base of operations. 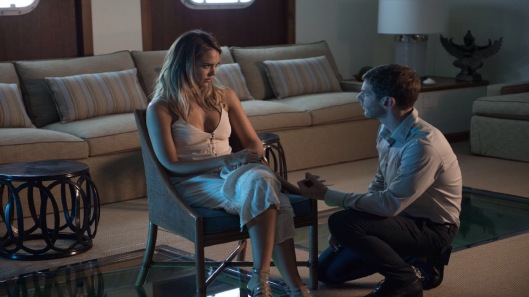 The only critique we have of the movie was the lazy formulaic “love story”, it felt scripted and heavy handed. Jason’s character doesn’t need a damsel in distress scenario to fuel his righteous anger, we would believe him battling the bad guy because it’s the right thing to do, we don’t need a quickie love story to drive the plot.

Both my husband and I were most engaged when Jason was doing his preparations, his reconnaissance and research for his “assignments” those were the best parts of the movie. They also brought in one of the big guns, Tommy Lee Jones, not a bad guy per se, not a good guy either, it will be interesting to see if he plays any role down the road in future installments. 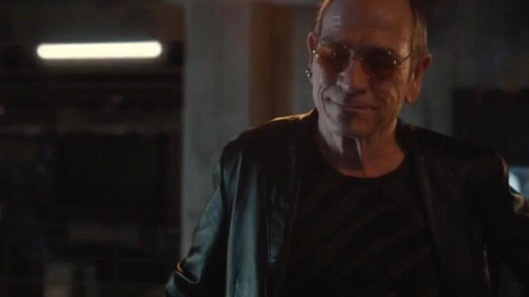 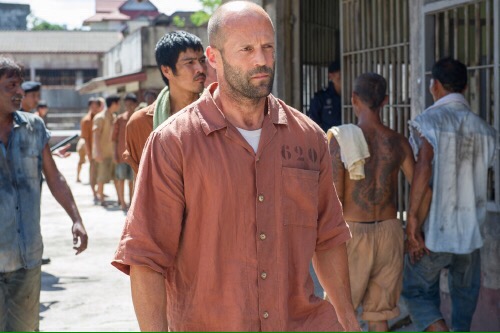 It was a lot of fun to watch, despite the kissing parts lol. 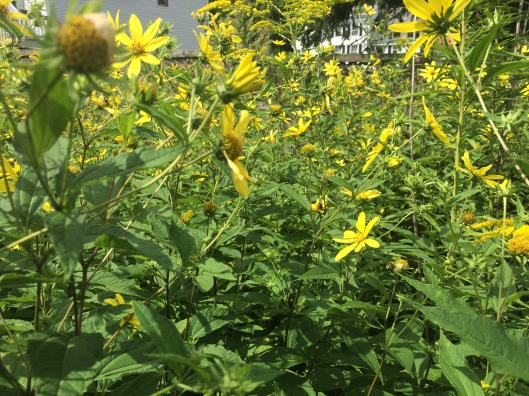 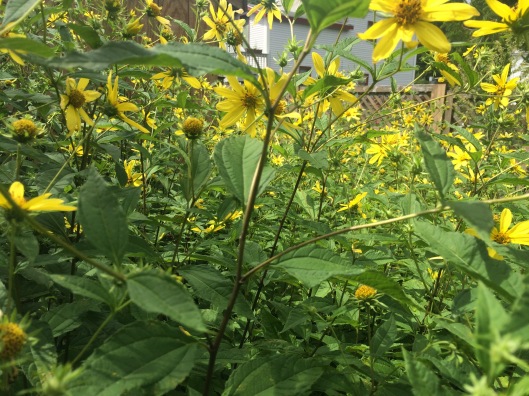 My teeny tiny field of yellow flowers represents the month of August to me. I love the almost forest feel these flowers give, especially the way the flowers rustle as Jack makes his way through the field of yellow. It is too cute when his little face pops out from the stems, he loves making his way through his forest, it’s one of his favorite places.

I love my yellow flowers though they make me a little sad, summer is on the way out and I’m not ready, I’d like to push the rewind button and get back to July, I feel that July didn’t get the Justice it deserved, it needs a do over. Where has the summer gone? 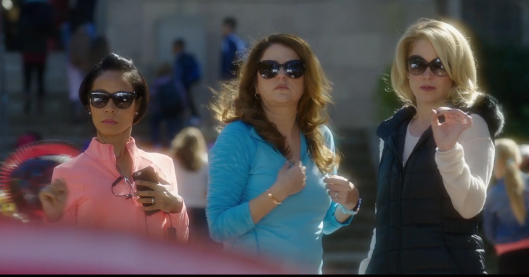 My husband and I went into this movie expecting silliness and slapstick, we weren’t disappointed, it was very funny, but it was more than that, it dealt with the issues of expectations, judgment, responsibility, accountability and what does parenting really mean in the final analysis.

I liked how the movie highlighted the “mean girls” aspect of motherhood judging, you hope to escape it once you leave high school, however fast forward to your parenting chapter and you find those individuals who decide that they are the final arbiters of what is acceptable and what is not. During the movie I was trying to remember if I felt judged as a mother, it was hard because I was laughing a lot, but afterwards, driving home, I can think of a few times listening to other mothers speak about what they were doing and feeling inadequate. I now have the luxury of hindsight, our children are young adults and I have learned that you do the best you can and hope your children grow up to be kind, compassionate and happy. It is hard to be this philosophical when you are deep in the trenches with young children, work and all the after school activities and that’s what the movie explained quite creatively.

I loved the friendship between the three “bad moms”, friendship does wonders when you’re feeling lost or overwhelmed and the message that a happy mom is a relaxed mom. Mom is one big subject worthy of a movie and this one did it justice with a lot of laughter. 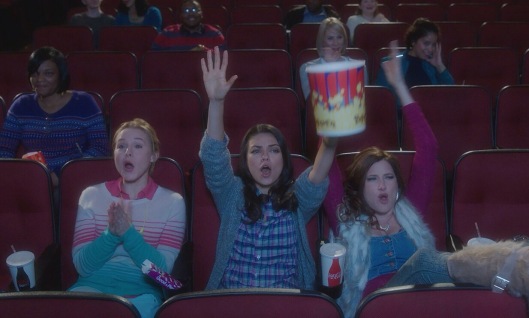 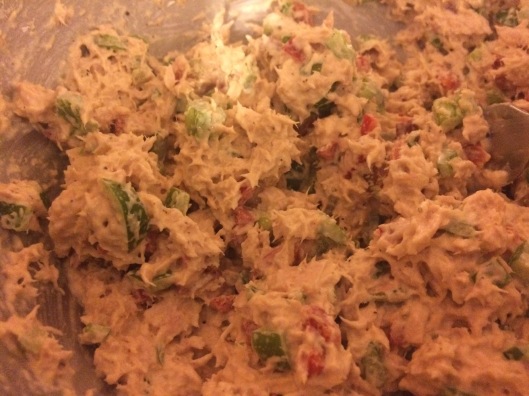 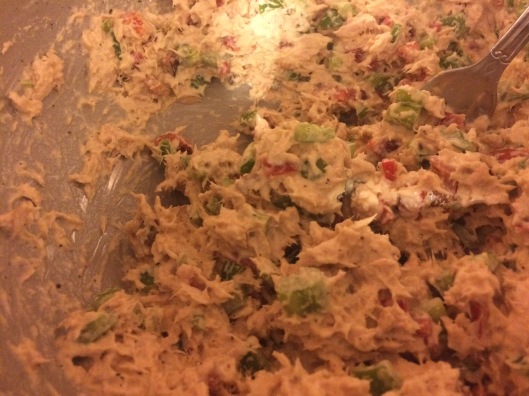 Have you ever had a craving for tuna fish, but don’t have exactly what you need to make it just the way you like it? Normally, I make my tuna fish with diced celery, minced celery leaves from the heart of the celery, mayonnaise, Dijon mustard, salt and pepper. So here I am,  hankering for a tuna fish sandwich, really craving one and I didn’t have celery, my husband suggested diced onion, but I don’t like raw onion with my tuna fish, I find it too overpowering in flavor. While I was going over other possible things to eat, my brain flashed on the half dozen green and red peppers we had in the refrigerator from our local farm stand. Why not put diced green and red peppers in my tuna fish? Funny that I had never thought to do that before, it isn’t far-fetched in terms of ingredient combinations, it had just never occurred to me to put them together on a sandwich. It was delicious, I had the crunch from the peppers that I ordinarily get with the celery and the flavor melded in nicely with the tuna fish, mayonnaise and mustard, it was a great sandwich. 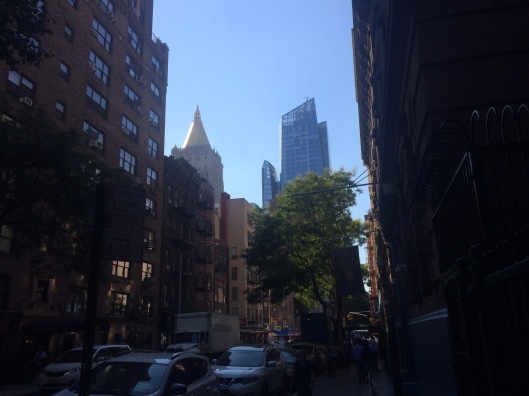 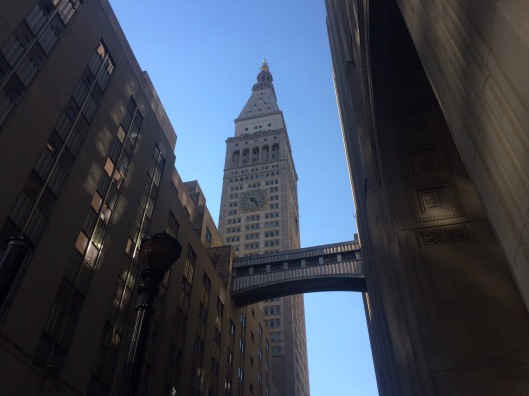 I love walking down whatever avenue I find myself on and looking up the side streets because you never know what gems you might discover. 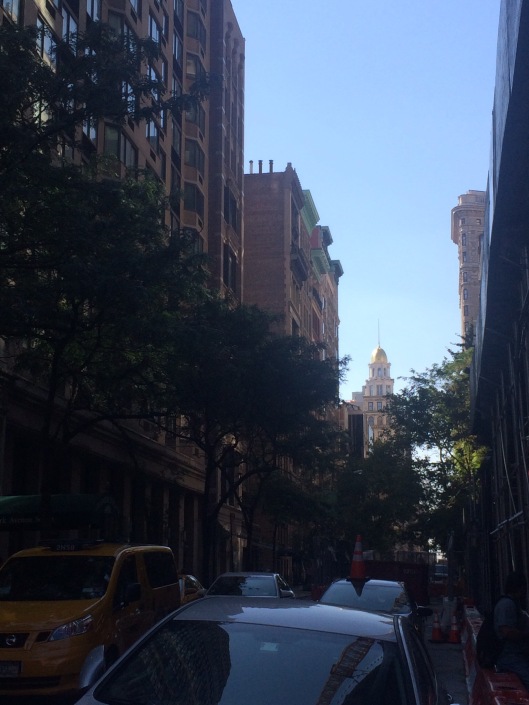 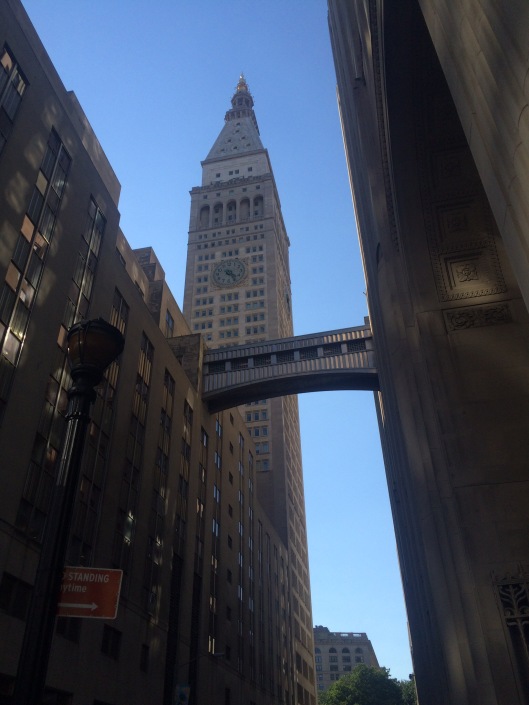 I posted two of the same picture because I cannot pick which is better, I was looking at the shadows, wondering over the inclusion of greenery and vacillating between which captured my vision best. So I gave up deciding. These captures were made as I was walking from the East side over to the Westside in the twenties, it was still a nice day even with the hotter temperatures because a nice breeze was blowing down the avenues. New York is a treasure trove of photographic subjects, all you need to do is look, personally my favorite way to look is to look up. 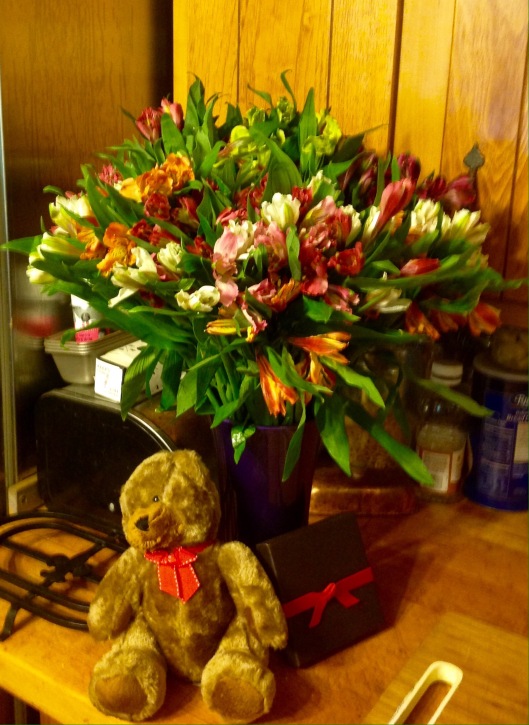 I have been so lucky, all of my friends everywhere have given me so much love and support, I credit them with my continued good spirits and can do attitude. Today I was happily surprised with these beautiful flowers, adorable teddy bear and chocolates from a childhood friend who lived next door to me, Annie. She was older than I and I remember looking up to her as a positive role model. She was always so nice to my little sister and I, always had time to talk to us despite being a part of the older crowd. I wasn’t expecting these flowers and when I read the card, I felt buoyed by friendship and connection. The ties and connections cemented in youth and continue to adulthood are tremendous gifts and I cherish them. Keeping my spirits up is so much easier when I see and feel the support and love from my dear, dear friends. 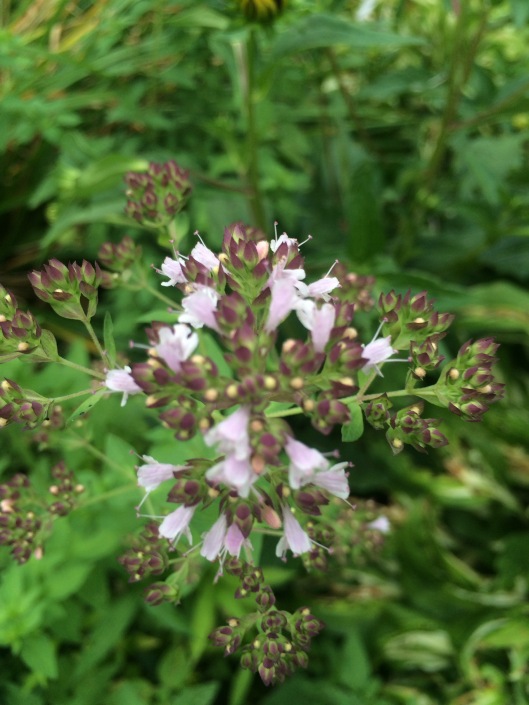 I chose to post a picture of my oregano in bloom because oregano is a plant of nutritional and medicinal value and that’s a big part of my focus right now. Today went well at treatment, the I.V went in without a hitch, my blood work came back all set of chemo and my anti-nausea meds worked like a charm. The only painful part, when all was said and done, was peeling the tape off my arm, it hurts when they do the slow pull,  they don’t want to compromise the injection site, but if that’s my only complaint of the day then I am a lucky one indeed lol.