What a production to get my tweet out there to NASA lol. Jack is with us and I don’t like to leave him in the hotel room, I also figured that Jack should be in my GlobalSelfie, because he lives on Earth and he loves our planet as much as I do. So I took him downstairs with me to the Business Center to print out the PDF for NASA tweet, he was a little squirrelly on my lap because he had to do to the bathroom, but since it was drizzling outside, I wasn’t going outside first to get wet and then come back in to print the paper and then have to go back out into the rain. Jack settled down after a bit and I got the printout and outside we went. Jack did his business and then I picked him up where he got squirrelly again, my thumb grazed the button and poof,poof, poof, three shots and I said to Jack “well that is going to have to do it, because we aren’t getting anything better looking than this, we were getting pretty bedraggled by this point.

I went through all of this because my first attempt came out very nicely, but I didn’t have access to a printer so my tweet doesn’t show any coordinates, a pretty picture without the details, so useless. 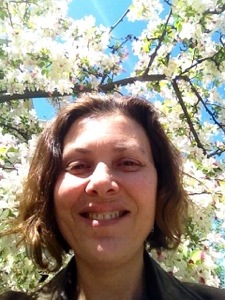 Earth Day is a special day for you, me and everyone in this world. 😀