It’s funny how different Jack behaves with his Papa versus the way he treats me. By now all of you know that Jack sees me as his furniture and an extension of him, if I’m sitting, he is on my lap, if I’m laying down so is he, with some part of him touching some part of me. Jack leaves me if there is food involved and usually that means going to see what Papa is doing, wherever he might be in the house or in a hotel room. If Papa arrives, he gets greeted with happy squeals and a lot of curious smelling, to see what good smells may mean for Jack’s belly.

Yesterday afternoon, I heard my hubby’s voice from the hallway and I opened the door saying to Jack “is that Papa?” Jack’s tail wagging a mile a minute went out to find and greet his Papa and follow him back into the room. What was interesting was that there were two nice gentlemen who wanted to say hello to Jack, but Jack wasn’t really interested. He had found his Papa and now he wanted to come back to me and get back into the room.

This morning Jack found his Papa in the bath tub and was surprised to see him in the bathroom from the newly opened partition that separates the bedroom from the bathroom. I can’t really figure out why there is a partition that opens up between the bathroom and the bedroom, personally I like privacy, but when the partition is open you can see the t.v from the bathtub. Still I love my t.v, but even I have limits on how much t.v is needed. I like my bathroom time to be my private time. Jack on the other hand really liked seeing his Papa from the comfort of the bed, standing on the bed on his tippy-toes with his tail wagging so quickly, all you see in the picture is a blur where the end of his tail should be. He loves his Papa. 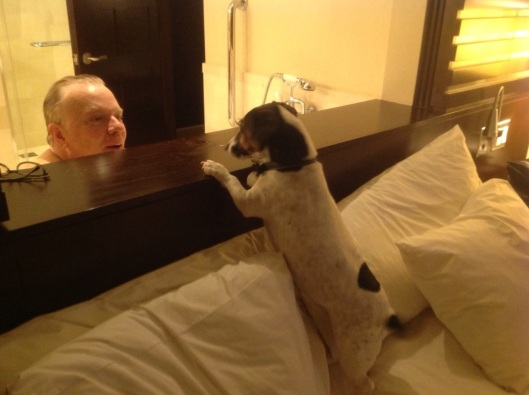 I love the way the camera captures the high speed wagging by making the blur seem to be moving, it gives you the idea of how fast Jack’s tail wags, he sometimes even whips his sides, he gets so happy to be with his Papa.