My baby girl had quite a bit of separation anxiety when she was little, she was attached to my hip for years. Jack is doing the same thing. My hubby, Jack and I drove down to visit with my Mother, granted Jack is not a fan of New York, but still, you would think that he would be getting used to it by now. My Mother and I went out together to purchase shrimp for dinner, before leaving, I walked Jack all the way to Astoria Park and he did everything that he needed to, so I felt great leaving him with his papa. My mother and I walked all the way to 30th Avenue and 35th Street and back and when we got home, my hubby announced that poor Jack had parked himself in front of the door to wait for me and after a bit, he started howling for me and it was pitiful to hear. 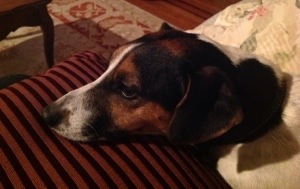 Well, what to do about the little guy? I brought all of his toys, I didn’t forget his bunny and he was with his papa, so I don’t know what else I can do to relive his separation anxiety. My hubby was non stop on his phone so maybe next time, he could talk to Jack and sit with him. Poor thing, I feel bad but I can’t take him everywhere. I wonder what goes on in his head while I am gone. I know that when we are together, he is never far from me and he knows where I am at all times in the house. The only thing that entices him away from me is food; if his papa is eating something, Jack is off my lap and sitting next to my hubby in a flash. I don’t know what Jack would do if he had to choose between his belly and his Maman, lol.

We are lucky to have him; he loves everybody but he sure does love his Maman, me! The little baby boy.

2 thoughts on “Jack and his separation anxiety”