It finally stopped snowing this morning and I estimate that we got at least 6 inches of snow but with the insane wind, the snowdrifts are quite high. I only took Jack for his walk once today because the cold and the wind made it practically unbearable. We did our mile loop and the wind was so bad that I started jogging back to the house with Jack and I never run; I had to stop because my knees started going so I dropped back down to my habitual brisk walk, but that wind was relentless, howling and jabbing my exposed skin with snow pins. I don’t think that Jack minded; he was miserable as well.

I took some pictures of our winter wonderland, I took them at 5:30 so it was dark but I am hoping that the lights twinkling in the windows and on the hedges will show up despite the darkness. 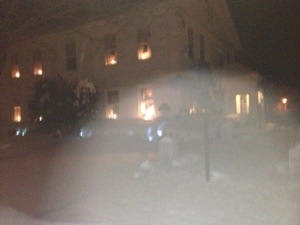 The WordPress.com stats helper monkeys prepared a 2012 annual report for this blog.

If I could be any type of animal, what animal would I choose to become?

I don't know about that one, it's a dangerous world out there between poachers, hunters and habitat loss. Perhaps becoming one of the sleek big cats; because they are so very beautiful such as the Snow Leopard, the Jaguar, the Tiger or the Lioness. Or, I could be a bird and soar in the skies such as a Peregrine Falcon or a Hawk or an Eagle.

According to Greek myth, the god Dionysus turned a ship load of hapless Greek sailors into dolphins when they panicked at the sight of his real form and jumped overboard without knowing how to swim and that's why dolphins seem so human like, so that might be a good shape to adopt.

If I were lucky enough to find a good pet owner; perhaps being a dog like a German Shepard would be a nice change of pace; being taken care of all day long, fed and given water, paid attention to and walked and loved. That could be the way to go.

However, I think that I will stick with being human and taking care of little Jack. I will also continue signing as many petitions as I need to; to help with the plight of all of our endangered species. That's what I'll do.