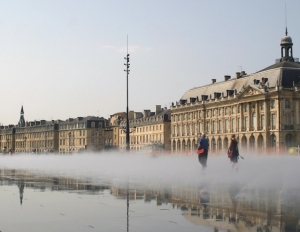 This morning while I was reading through the news; at this point I was browsing through WorldCrunch, I stumbled upon the headline “Bordeaux youths drowning due to binge drinking”. My initial reaction was shocked curiosity, not about the drowning, though those are tragic and devastating but the cause of the drowning, the binge drinking. I was always under the impression that binge drinking was primarily an American phenomena, primarily due to the “forbidden nature” of alcohol in our society. My experiences as a teenager and as a young adult in France with my cousins and my friends, was a healthy respect for alcohol and its place in social situations. The article was depicting a different social scene than what I remembered. The journalist was chronicling how within the city of Bordeaux on the Quais, which means docks in English, the youth are jumping from bar to bar partying and heavily drinking and, if not doing that, then drinking out in the nearby squares from open containers. My understanding of the drinking culture in France was that it is a culture that coexisted strongly with food, one wasn’t done without the other. Drinking for the sake of getting blind drunk wasn’t something that I associated with the youth of France. Thinking back on my experiences during my freshman year in college at the dormitory, the binge drinking culture was part of college life here in the States and it wasn’t really scrutinized but rather seen as a rite of passage, a youthful indulgence that everyone would leave behind upon graduation and entry into the real world. It is distressing to think that binge drinking in France has driven young men to their deaths because they couldn’t navigate the waterfront. It is tragic beyond words, any time there is a senseless death, it wrenches the heart.

I have to say that reading the article in its entirety was an eye opener and I was impressed with the resolute commitment that all appropriate authorities are making to the Bordeaux youth. The powers that be, the city government and police, are engaging in putting free bus service at the disposal of the night clubbing youth, the police are actively ticketing pedestrians holding open containers on the street, the city is considering installing an attractive fence closer to the edge of the river Garonne to physically deter anyone from taking an unwanted drop into the river. The immediate call to action is a reason to be optimistic for the future. The first step to solving a problem is addressing it.

I have two French films that come to mind instantly. My Father’s Glory “La Gloire de mon Pere” and My Mother’s Castle “Le Chateau de ma Mere”
The remaining three are tough because there are the serious films that make you think and then there are the favorites that don’t necessarily do anything but make you happy. The three that make me happy are:
Princess Bride
Willow
Lady Hawke
Serious films, I would say Philadelphia, Saving Private Ryan, Schindler’s List. Then I think of science fiction and there are Star Wars, Fifth Element and Lord of the Rings. I know that I haven’t answered the question correctly but oh well. These types of questions are just too difficult.