Cheesecake is a classic dessert regardless of which version appears on your plate. Look for a recipe and there are hundreds of different recipes; the New York style cheesecake, the Italian cheesecake, sour cream and cream cheese cheesecake, fruit covered cheesecake and chocolate swirled cheesecake. I could go on and on about the different ways cheesecake can be prepared, much like Bubba did when he talked about shrimp in the movie Forrest Gump; coconut shrimp, popcorn shrimp, fried shrimp all while cleaning the bathroom floor tile with his toothbrush.

My husband made a scrumptious cheesecake on Monday, it was the classic New York style cheesecake with a sour cream topping. It was arguably, according to our two kids and in my own opinion, the best cheesecake that we have ever had. It was so creamy and smooth, the sour cream offset the cream cheese richness and the graham cracker crust lent the perfect contrast in texture. The crunch highlighted the creaminess, the one made you appreciate the other so much more.

When my hubby went off to work, he forgot to bring a slice or two with him so that he could at least taste the fruits of his labors. Which was a pity because since his creation was so delectable, the whole cheesecake was gobbled up awfully fast. So in preparation of my hubby’s return, I, at his request, made a replacement cheesecake. I found the recipe which served as his guide and followed it. The cheesecake, right now is resting in the refrigerator, according to the recipe, the cheesecake needs at least 24 hours of rest to develop its creaminess and flavor fully. I can attest to that because my first slice of my hubby’s cheesecake was good but after the next day, there was a marked increase in the deliciousness. The last slice to be devoured was definitely the best one out of the whole cake. So I am hoping that by tomorrow night, my replacement cheesecake will be close to the deliciousness that my hubby’s had achieved. It would be nice if it was because he deserves at least that much.

What’s your favorite place to grab a cup of coffee?

It depends on my mood, if It’s cold and I need coffee for a long haul doing errands than it is Dunkin Donuts for me. However, if I’m in the mood for sitting and enjoying a leisurely specialty coffee for a while, I like Starbucks for a large cage latte. 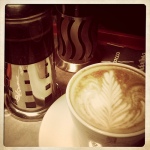 Boehner, who is Catholic, should know that falsehoods are against the rules as well. He and his party are going after the poor in order to give the wealthy as many tax breaks as possible. A civilized society should be concerned with those who are the most vulnerable, women and children and there are far too many of them poor and hungry. The wealthy have done exceptionally well due to the confluence of tax cuts and deregulation, not because of their higher virtue, moral superiority or higher intelligence. It isn’t normal that a C.E.O make 250% more than an ordinary employee, that fact hearkens back to the middle ages where the lord of the manor lived far better than the peasants because they thought it was their divine right and because supposedly they were the protectorates of their people. Those days ended because the common folk woke up and revolted, we are already revolting now, it is time for the GOP to realize that the wool has been lifted from our eyes and their platform is unacceptable.
Read the Article at HuffingtonPost

What I find interesting is that Romney looks to John Kerry as his guide, in terms of what is correct enough in tax years to release, when his campaign does the minimal amount of research into Kerry’s 2004 campaign strategies. Why hasn’t Romney simply looked to his own father’s presidential campaign strategy as his guide. His father had no problem releasing twelve years worth of tax returns. As it turns out, if Romney’s campaign strategists had gone the extra mile and done proper research, they would have found the twenty year’s worth off Kerry’s tax returns, instead Romney looks even more suspect and less trustworthy. Moreover, the tax extension for 2011 looks bad and when you compare President Obama’s 20% for 800K compared to 14% for Romney’s 20 million in 2010, you really start asking questions.
Read the Article at HuffingtonPost

Interesting that Romney immediately thinks of a chain of stores rather than praising a local bakery.Whether it be the chain 7-11 or Walmart, chains do pretty much the same thing to an economic environment. I know that Walmart is a humongous employer but the damage that their chain has inflicted on medium size and small size towns has been incredible. All the small local businesses put out to pasture because of the ability of a whale of an organization to undercut their small share of the market has reshaped the landscape of much of middle America. We don’t rail against it as much as we used to because it has been accepted as a fait accompli, but Walmart employees don’t seem to have the best work environment, they lack access to health care, the women are discriminated against, though they tried to get a class action suit, Walmart’s bevy of attornys were able to quash that down. It’s funny that Romney through his gaffe’s, reminds me of yet another reason why I am angry with the GOP and their policies.
Read the Article at HuffingtonPost